If you were active in any  branch of the military (including the Reserves and National Guard) at any time between 2003 and 2015, and were issued the Dual-Ended Combat Arms Earplugs and suffered hearing loss or tinnitus (ringing in the ears), you may be eligible for compensation from the ear plug manufacturer.

The Dual-Ended Combat Arms Earplugs (CAEv2) were standard issued equipment for the military between 2003 and 2003.   The earplugs were defective which put thousands and thousands of military personnel at risk for permanent hearing loss or impairment. 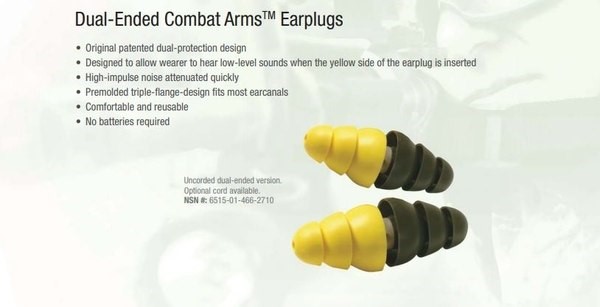 The dual-ended ear plugs were designed to provide two levels of ear protection.   One side was supposed to block all noises and the other was intended to protect the ear drums from gunfire and explosions but allow the users to communicate freely.   The ear plugs contained a design flaw which made them too short to be properly inserted into users’ ears. As a result, the defective earplugs could gradually loosen and not perform properly.  When the ear plugs were not firmly in place, it could lead to hearing loss and/or tinnitus  for some soldiers.

The Combat Arms Ear Plugs were initially designed and manufactured by Aearo Technologies.   The company was acquired by 3M in 2008.  In July 2018, according to a DOJ press release, 3M Company, the manufacturer of the earplugs, agreed to pay $9.1 million  to resolve allegations that it knowingly sold the U.S. military defective earplugs  – its dual-ended Combat Arms Earplugs, Version 2 –  to the U.S. Military  without disclosing defects that decreased the actual effectiveness of the hearing protection the device offered.  A whistleblower alleged that the company new about the design flaw as early as 2000 but continued to market and manufacture the earplugs without ever disclosing the design flaw.

If you can answer yes to these questions, contact Sadler & Sadler now for a free legal consultation.

Mr. and Mrs. Sadler have proudly represented military members and veterans in personal injury matters throughout the State of Texas. We have represented many people injured by defective products such as asbestos and transvaginal mesh.  We are proud of our results and the personal level of care and attention we provide our clients.    While we will take the 3M earplug cases from any military member in the Nation, we are local and  committed to those folks in Texas and on the Texas bases:

It would be our honor to represent those who have served our country  and been injured by defective 3MCombat Arms Ear Plugs.  Please contact us for a free, no obligation review of your case.